From Ifigenia, the wiki for intuitionistic fuzzy sets and generalized nets
Jump to navigation Jump to search

IFSTool is a software for checking properties of intuitionistic fuzzy implications and negations. It is being developed by Dimitar Dimitrov in the frames of the bilateral scientific exchange project Design and development of intuitionistic fuzzy logic tools in information technologies. IFSTool requires Microsoft .NET Framework (already installed on newer MS Windows versions) to run.

Home screen of IFSTool. A list of implications has been loaded for investigation. To the right the list of possible actions is given.

Some of the properties that can be checked are the following:

All generated data can be exported to various text and graphic formats, such as TeX, HTML, PNG and etc.

All implications (or negations, respectively) have to be imported by the user from external text files. Files should be in the following format:

Here's a short example of a file which can be imported:

Checking the validity of user-defined axioms 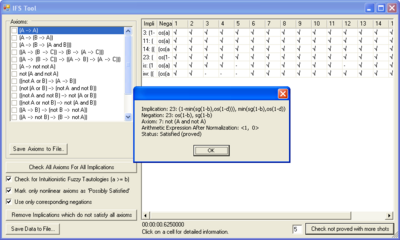 The screen for checking axioms. To the left a list of axioms is given and to the right - the results from the check. Implications are given in the rows, and axioms - in the columns. Clicking on a table cell, a window with more detailed information is being opened.

To check the validity of axioms for a set of implications (or negations), you have to execute the following steps: 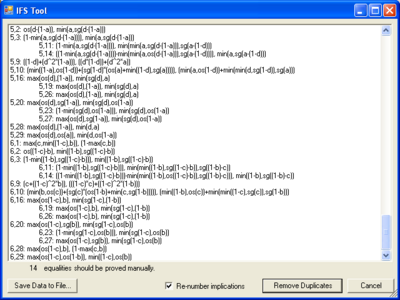 Removal of duplicates of implications or negations in IFSTool. In the example, implications No. 5,11 and 5,14 are equivalent to implication 5,3, so are given below indented.

To check if a new intuitionistic fuzzy implication (or negation, respectively) is not equivalent to some old one, the following approach can be used:

Drawing the graph of relations 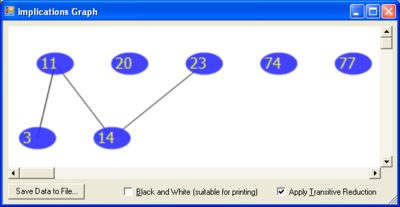 Drawing the graph of the relation "smaller or equal".

To draw a graph for the relation < :

IFSTool uses binary trees to represent the expressions. When a formula has to be checked: