From Ifigenia, the wiki for intuitionistic fuzzy sets and generalized nets
< IFSTART
Jump to navigation Jump to search

The EUSFLAT Working Group on Intuitionistic Fuzzy Sets: Theory, Applications and Related Topics (IFSTART) was approved with voting during a joint symposium collocating the 16th World Congress of the International Fuzzy Systems Association (IFSA) and the 9th Conference of the European Society for Fuzzy Logic and Technology (EUSFLAT), Gijon, Spain, 30 June – 03 July 2015.

The event brought together researchers, both theoreticians and practitioners, from all over Europe and the world working on fuzzy logic, fuzzy systems, soft computing and related areas.

The original idea about IFSTART was conceived during the 17th International Conference on Intuitionistic Fuzzy Sets, held on 1-2 November 2013 in Sofia, Bulgaria. 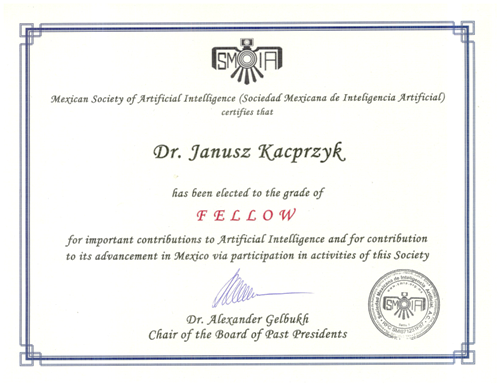 The awarded diploma to Prof. Kacprzyk

In September 2015, Prof. Janusz Kacprzyk was awarded as the first Fellow of the Mexican Society of Artificial Intelligence, with its corresponding title of the Permanent Honorary Member. These titles were introduced this year for the first time. The certificate was publicly handed to Prof. Kacprzyk at a ceremony at the Annual Conference of the North American Fuzzy Information Processing Society (NAFIPS'2015) by Prof. Ildar Batyrshin, a member of the MSAII Executive Board.